I can’t believe how long it’s been in between posts. Anyone out there still? So, I am finally back in the blog with something to share. We’ve just been taking an intensive stream of orientation classes for year 9 and 10 students. I thought I’d share what I’ve been covering with the 10s. The topic is digital citizenship and the possibilities are many. The time is limited, and the fact that I don’t know the students by name (or personality) makes it tricky to have a really rich discussion – which would have been really nice.

I took a risk. I wanted to provide a more interactive experience for the students so I opened up a chat room on TodaysMeet. I knew what would happen – silly comments – but I hoped for more. There was a small but encouraging number of sensible comments. Who can blame students when given the opportunity to chat during class? Even as I spoke to them about sharing their responses, comments, ideas and questions, I knew that a chat would contain chat. I pulled out a few reasonable comments and questions. I was still happy with the activity because we were talking about social media and they were involved.

Bill: The analogy comparing tattoos with our digital footprint was very creative

Malcolm: Why was it funny when the TED talker said something about narcissism?

Ian: Why has the speaker made a connotation to the Greek characters?

AJ: I deleted my online tattoos

AJ: This is why I don’t have my face on Facebook

AJ: So I think what he is saying is that we all have digital tattoos

Is immortality when the records of you on the Internet exist longer than you do (forever)?

After a discussion about what some of the ideas in the TED talk meant – digital tattoos, digital immortality, online tracking, going over the top with photos and videos on your phone, social implications of over-connectedness – I gave the students some time to investigate their digital shadows on Trace My Shadow. 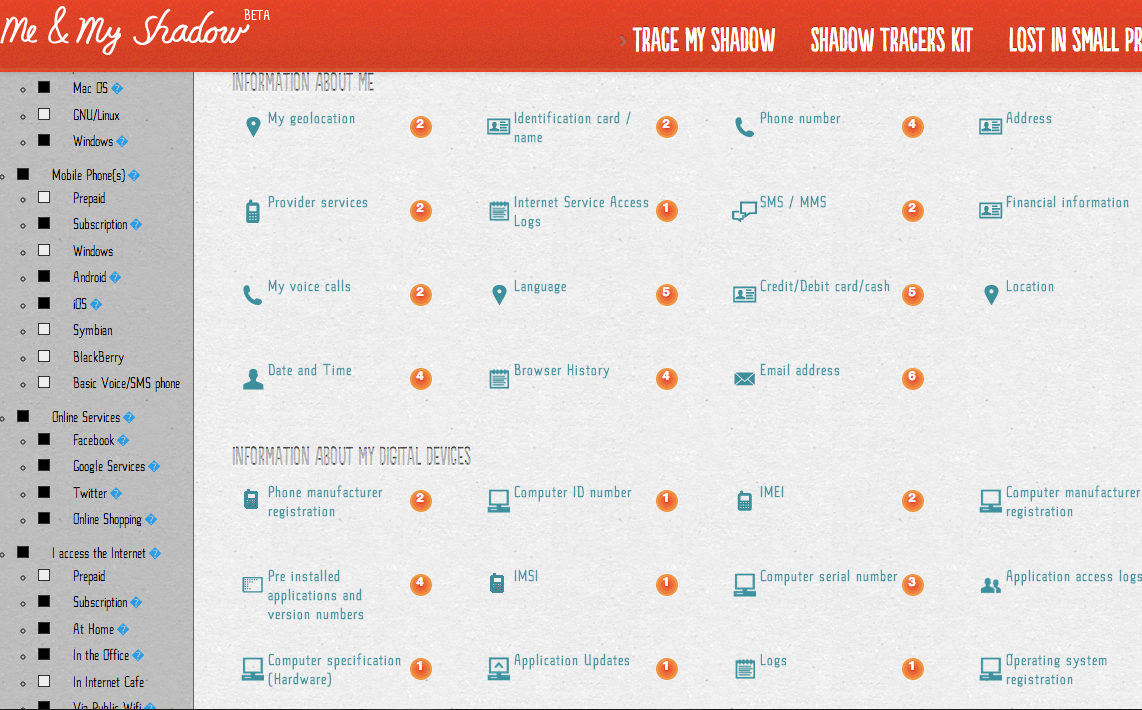 How this works: you check all the devices you use, and which applications you use, eg social media, and where. This enables you to investigate the traces you’ve accumulated and look at these in detail, while getting tips on how to reduce these traces. I had 95 traces. The students were interested in this and I observed a fair bit of surprise. Of course, they were too cool to express any real concern.

I redirected the conversation to what an employer might find about them online. We watched the following video –

They googled each other and then themselves to see what others could see of them online. We spoke about inappropriate postings and I said that I assumed they were too sensible to do such things. We talked about the stereotypical adolescents in the eyes of stereotypical adults, and I told them that I wanted to stand up for them, and that I’d seen evidence of so much positive online contribution from young people – initiative, creativity, collaboration, social and environmental conscience. I asked them how they would stand out from the crowd in terms of positive digital footprint. They were pensive as I conjured up a situation where an employer had to choose one of them, and they were of equal academic standard, but some of them had a digital profile which demonstrated their social service, particular interests and talents, and co-curricular activities at school.

We skipped back to online safety and privacy, and we watched a silly video about dumb passwords, followed by a very short one about how to create a strong password.

I asked them if they  could live without their phone. We talked about manners – whether it was acceptable to use your phone while you were in company, and if they took photos and videos of everything and everyone. We watched the following video but we didn’t take it too seriously.

I admitted that I was the guy who turned his phone on in bed once the lights were out. They thought I was pathetic. I agreed.

There was so much more we could have talked about. If you’re interested you might like to have a look at the Libguide I’ve created. There is a second theme on this page – attention. I’m particularly interested in this topic, and follow Howard Rheingold who is an expert on it. A couple of the groups had longer sessions and we started this topic off by watching the old selective attention test. I expected some of them to have seen this and asked them not to spoil it for others. Watch it if you haven’t already done so. I won’t say any more about it in this post because that would be a spoiler. I wish I had more of an opportunity to develop these conversations in a deeper way. It was fun.