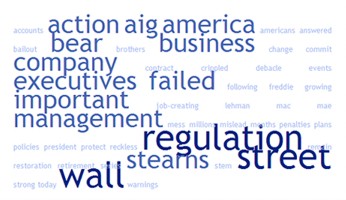 Just when you thought that Wordle was the be-all-and-end-all of the word tag cloud, along comes TagCrowd.com The tag cloud above is generated using Senator John McCain’s statement regarding the continuing Wall Street saga and the US government’s $85 billion bailout of AIG. The result is a handy visualisation of the most frequently used words in the speech. These word visualisations were found on The Online NewsHour in a post entitled ‘McCain pushes regulation, Obama blames failed economic philosophy in AIG statements.’

Here is Barack Obama’s reaction in a word cloud: 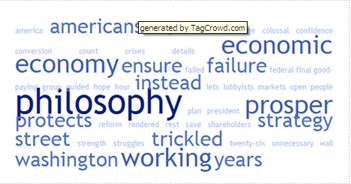 How is Tagcrowd different from Wordle? Both applications require the user to enter text, url or file for cloud generation. But whereas with Wordle, fonts, layouts and colour schemes can be tweaked, TagCrowd has more options for greater manipulation. The user has control of things, such as setting a maximum number of words to show in the cloud, setting a minimum frequency (not showing infrequent words), showing frequencies or not (word count next to word), ignoring words from a stoplist (ie. customised list of words to be removed), grouping similar words (eg. learned, learns, learning), ignoring common English words (eg. and, of, me), and other options. TagCrowd also allows the user to print a full-screen version of the tag cloud.

TagCrowd is more specific about the possible uses of the tag cloud:
‘When we look at a text cloud, we see not only an informative, beautiful image that communicates much in a single glance, we see a whole new perspective on text.’

There are some good suggestions for TagCrowd’s applications: topic summaries for speeches and text; a blog tool or website analysis for search engine optimisation; visual analysis of survey data; help for writers and students in reflecting on their work; and others.

I put in my blog url, and the result seems to have captured the front page: 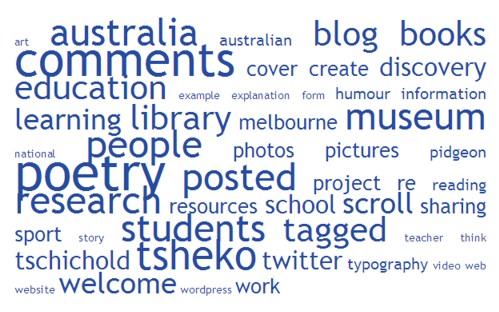