Chris Beesley is a graphic designer/illustrator living in Fairfield, Conneticut. His post, Seeking balance in a self-imposed spotlight,  raises a question relevant to bloggers, although he writes specifically as a graphic designer.

Here’s my big question; do I post more raw materials that haven’t been fully vetted yet, accepting that some may be real garbage and I may get judged as such? Or do I hold back most of the untried pieces until I’ve had an opportunity to really think about them, accepting the fact that some of the good stuff may never see daylight?

Chris posted this photograph to make a point about the rubbish he’d picked up around his neighbourhood while on a walk. 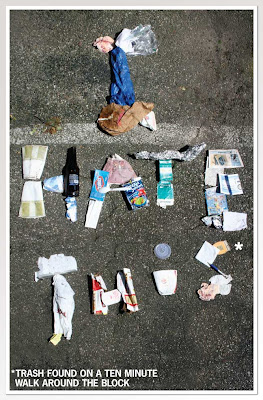 Looking back I’m glad I posted it, and I still believe that the poster was a good idea but there are definitely some things I might have changed had I waited.

Obviously, Chris is talking about his reputation based on the quality of his work, but his questions reminded me of the dilemma facing bloggers in general – with so much flying in from social media, do you go with your desire to get something out there while it’s current, and while your ideas are fresh, or do you wait until you’ve carefully edited your post?

Are blog readers more forgiving, not expecting the same quality of writing and thinking as they would from newspapers, magazines and journals?

It’s obvious that my posts would fail if assessed as coherent, well planned and properly researched writing, but aren’t blogs intrinsically more informal?

I really like Chris’ photo – mainly for its concept; it’s clever. I like the fact that he threw it together on the spot following his idea. There’s something to be said for this kind of spontaneous post.