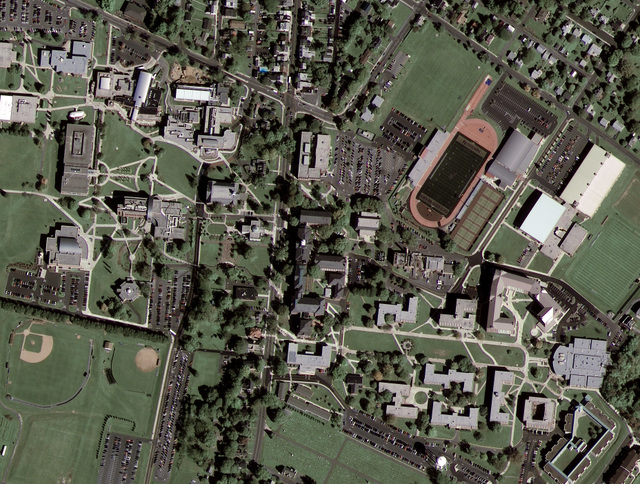 Google Maps and Google Earth have astounded us all with new possibilities in viewing the world, connecting our photos and stories to real locations. But, as the Read Write Web has pointed out, many of the top-down images have been unclear so far. All this is about to change as Google connects with GeoEye-1 to produce high-resolution images. Wired Science has posted the first Google/GeoEye image. Compare the new image to the one without GeoEye-1’s superior resolution.

Here’s some information on GeoEye-1:

GeoEye-1 is equipped with the most sophisticated technology ever used in a commercial satellite system. It offers unprecedented spatial resolution by simultaneously acquiring 0.41-meter panchromatic and 1.65-meter multispectral imagery. The detail and geospatial accuracy of GeoEye-1 imagery further expands applications for satellite imagery in every commercial and government market sector. To learn more about GeoEye’s collection and delivery capabilities, please visit our launch site.

Google is GeoEye-1’s second major partner after the National Geospatial-Intelligence Agency, a U.S. government agency that analyzes imagery in support of national security. The NGA will be retrieving GeoEye-1’s imagery at the maximum resolution of 43 centimetres, but government restrictions will limit Google’s images to a 50 centimetre resolution. Thanks to an exclusive partnership, Google will be the only online mapping site using GeoEye-1’s satellite photos.

As far as education goes, we’ve come a long, long way from the boring geography lessons, trying to connect the pale, coloured maps in our textbooks with real locations, mustering up enthusiasm for places we could only appreciate in fertile imaginations.

I’m happy to take advantage of Google Maps’ and Google Earth’s new and improved visual mapping – as long as they don’t come any closer to me.

About.com:Geography is a site worth checking out to support learning about current events in SOSE. Make learning relevant by focussing on what’s in the media now. You’ll find information about countries that are in the news, for example, the war in Georgia, countries in the Olympic Games, Olympic Games cities 1896-2014, geography and maps of China, photo gallery of Beijing. It might be worth signing up for a geography newsletter, or bookmarking Matt’s geography blog (which has an impressive geography blogroll).

The Google Earth blog has an interesting selection of post. Have a look at how Google Earth and Google Maps bring events and geography to life; watch Arctic ice melting on YouTube in Google Earth. So many Web2.0 geography opportunties!

Here is a video fly-through of the 3D Olympic Games site in Beijing that Google has released:

Skoolaborate put me onto this video by a young film maker, Robbie Dingo. The author of this blog uses this example to illustrate the learning potential of virtual worlds. He lists learning areas, such as maths, geography and problem solving that are demonstrated in the creation of this short and creative film.

Still browsing in my search for clarity and understanding of the purpose and potential of virtual worlds. What do you think?