I have been so touched and uplifted by people’s comments (on this blog and in person) following my heart-on-my-sleeve post after an unsuccessful job application. Thankyou to everyone for your extremely kind feedback.

Today I was interested in a comment by Marie Coleman who called me a linchpin and asked if I’d read Seth Godin’s latest book, Linchpin. I haven’t but I’ve heard about it, and I want to read it.

After reading a review of Linchpin, I thank Marie for this enormous compliment, and I don’t know if I am a linchpin but I would certainly like to be one.

There used to be two teams in every workplace: management and labor. Now there’s a third team, the linchpins. These people invent, lead (regardless of title), connect others, make things happen, and create order out of chaos. They figure out what to do when there’s no rule book. They delight and challenge their customers and peers. They love their work, pour their best selves into it, and turn each day into a kind of art. Linchpins are the essential building blocks of great organizations. Like the small piece of hardware that keeps a wheel from falling off its axle, they may not be famous but they’re indispensable. 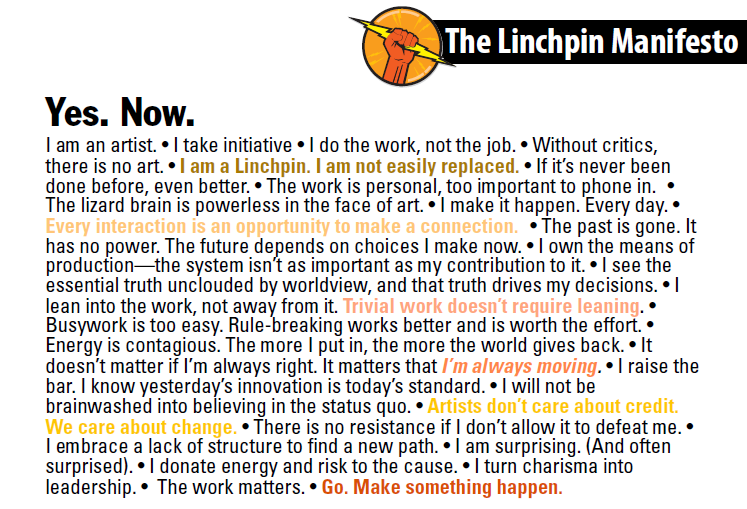 The terms ‘art’ and ‘artists’ need to be explained here:

Art isn’t just for painters and poets. Art is “anything that’s creative, passionate and personal. […] An artist is someone who uses bravery, insight, creativity, and boldness to challenge the status quo. And an artist takes it personally.” (p. 83)  You don’t create Art as something to keep to yourself, you share that talent or ability with others.

(from review on Squared Peg)

Do you think you’re a linchpin? Would you like to be?

Orchestra conductor Itay Talgam has discovered that the secrets of good conducting shed light on leadership in general. I found the messages in this TED talk to be very relevant to teaching.

finds metaphors for organizational behavior  — and models for inspired leadership — within the workings of the symphony orchestra. Imagining music as a model for all spheres of human creativity, from the classroom to the boardroom, Talgam created the Maestro Program of seminars and workshops.

Talgam’s workshops aim to help everyday people develop a musician’s sense of collaboration, and a conductor’s sense of leadership: that inner sense of being intuitively, even subconsciously connected to your fellow players, giving what they need and getting what you need. It’s this art of listening and reacting in the moment that makes for a swinging jazz combo, a sublime string quartet, a brilliant orchestra — and great teams at work.

According to Talgam, it’s not all about complete control of the orchestra. It’s about the joy of enabling other people’s stories to be heard at the same time – the story of the orchestra, that of the audience, unseen stories of people who made the concert hall and even those who made the instruments.

Talgam shows examples of different styles of conducting. There is the example of the conductor who is so clear about what he wants that he becomes overclear. Talgam describes this type of conductor as having a strong sense of responsibility. This type of conductor insists that there’s only one story to be told, only one interpretation of the music, and that’s his interpretation. In this case, the musicians feel they are not allowed to develop, but are only used as instruments.

Talgam insists that leadership of the orchestra can be achieved with less control, or with a different kind of control.

One of the conductors is shown conducting with his eyes shut, confusing the onlooker with his apparent withdrawal from control. Talgam explains that, in this case, the musicians get their cues by looking  at the conductor’s face and gestures, and then looking at each other, with the first players of each section leading. This conductor claims that the worst damage he could do to  his orchestra would be to give them an overly clear instruction which would prevent them from listening to each other.

In another example, the conductor explains that by not telling the musicians exactly what to do, he’s opening a space for them to put in another layer of interpretation, another story. Talgam explains that this method without clear instructions works because it’s as if the musicians are on a rollercoaster, whereby the forces of that process put the action into place. You know what to do and you become a partner. This experience is exciting for the players.

And what happens when there’s a mistake? The conductor’s body language is enough. When it’s needed, the authority is there  but authority is not enough to make people partners. This kind of conductor is there 100 percent but not commanding, not telling them what to do, instead enjoying the whole experience with them. In this case the conductor creates process but he also creates the conditions in the world in which this process takes place. The soloist is allowed to be autonomous and is consequently proud of his work. Developing a partnership brings about the best music.

I think we can take a fair bit out of this talk and apply it to teaching. Teaching is like conducting or leading. What resounds with me is the fact that overly explicit instructions and tight control can be at best limiting, and quite possibly suffocating. Setting up the process and allowing room to move seems like a good way to teach. Realising that your interpretation is not necessarily that of everyone else opens up rich possibilities for learners. Understanding that members of the orchestra or class learn from each other. Getting to the point where you know the students so well that they can read your every nuance, and standing back and smiling, just enjoying the process unfolding before you, is possibly every teacher’s dream.

When, as a teacher or leader, you create the environment, give support, and then step back – you get to the wonderful point of ‘doing without doing’. As Itay Talgam says,

if you love something give it away.

This inspirational talk is by Benjamin Zander, a leading interpreter of Mahler and Beethoven, known for his charisma and unyielding energy, and once conductor of the Boston Philharmonic.
Benjamin Zander has ‘two infectious passions: classical music, and helping us all realize our untapped love for it — and by extension, our untapped love for all new possibilities, new experiences, new connections. He uses music to help people open their minds and create joyful harmonies that bring out the best in themselves and their colleagues’ (TED). END_OF_DOCUMENT_TOKEN_TO_BE_REPLACED