We’re in the 4th unit of Connected Courses: Diversity, equity and access. I thought I’d look back at some of the previous questions and objectives from which  we’ve been making meaning together. Only now have I realised that each unit has a ‘design touchstone’, and while I was investigating what this could mean and how these linked to each other, I decided to re-familiarise myself with the first one: Water.

I watched again the video of the speech given by David Foster Wallace to Kenyon College’s 2005 graduating class.  The video starts with the story of two young fish swimming along when they meet an older fish swimming the other way.  The older fish asks ‘How’s the water?’, and after they’ve passed him, one of the younger fish asks ‘What the hell is water?’

A rough summary of the message would be that the most obvious and important realities are often the ones that are  hardest to see and talk about.   Foster postulates that a Liberal Arts education is not as much about filling you with knowledge as it is about teaching you how to think – not in terms of the capacity to think (which we all have ) – but in terms of the choice of what to think about. He mentions that we often live unconsciously, that is, not questioning where our belief systems come from, and he encourages us to have a critical awareness of ourselves and our certainties.  He talks about our default setting which positions us as the centre of the universe and suggests we do the hard work to rid ourselves of this hard wiring which leads us to interpret everything personally by learning how to exercise some control over what and how we think, and being conscious and aware enough so that we choose what we pay attention to and understand how we construct meaning from our experiences.

I feel that I need to go back and revisit readings many times to have the ideas and issues float to the top of my consciousness where they are in view and so that they don’t sink to the bottom and get forgotten.  Connected Courses has enabled me to construct meaning in conversations with people and in the solitude of my own thoughts. I’m beginning to feel as if I’m conscious of the water.

It’s interesting to note that although Connected Courses  is designed for faculty within higher education who are looking at developing online, open courses,  so far the technology part of constructing the courses has been in the background. This is a valuable lesson for schools introducing new technologies to support teaching and learning. In Connected Courses we started with the why and we moved at our own pace supported by the network of participants. Expertise has been distributed and sense making has not only been in the form of text; participants have shared creative responses which have included drawings, comics, songs and other audio, slides and video and more.  Some people have tried new things!

We’ve been given the opportunity to construct meaning together, and  given choices about how much and what we focus on.  My opinion is that this approach has enabled me to look more deeply into selected things.  I haven’t felt rushed or forced in any way; I’ve had choice and control.  At first I may have felt intimidated by learning in an academic cohort, but now I feel energized. It’s been fun!

Feel free to look at what I’ve collected so far in my Connected Courses Pinterest board.

Last night I travelled to another planet. Sitting in a long, narrow room bursting at the seams with puzzle and palindrome addicts, I wondered where these people had been hiding? Out of body experience? No, just another Wheeler Centre offering. I had come to the session David Astle: Confessions of a Wordaholic.

Father holds six over least arrangement. (5, 5) A gibberish sentence for many of us, but an irresistible clue for those in the thrall of cryptic crosswords. And in the Australian scene, there are none more cryptic, more revered and more dastardly than the man known as DA.

To celebrate the launch of his new book Puzzled, meet David Astle and find out why Geoffrey Rush calls him the ‘Sergeant Pepper of cryptic crosswords’.

As Harriet Veitch said in her Sydney Morning Herald article:

It’s scary inside David Astle’s brain. It’s stuffed full of words endlessly doing things. Palindromes and semordnilap run back and forth, spoonerisms climb up and own, thickets of anagrams form and reform and the tendrils of double meanings reach out to trip the unwary.

Even Astle occasionally wants to get out. “If anyone finds the exit, could you let me know? I’d like a rest sometimes.”

Despite the fact that I am not a puzzle person, that even when shown the answer , I remain puzzled, it was an immensely enjoyable and mentally exhilarating hour. I had expected David to be – dare I say it – more of a geek, considering the intensity of his word obsession, but in fact, he is  very sociable and entertaining, with a sharpened intellect and almost incapable of leaving a word alone, set on automatic pilot to continuously pull words apart, stretch them into new meanings and possibilities. In David’s own words, his gift for word play is ‘like synesthesia, only instead of seeing colours, I just see acrobatic letters’.

David’s new book, Puzzled, is surprisingly thick. Apart from chapters of clues, Puzzled is also a insight into David’s life and ‘how a seemingly normal boy from Sydney’s northern suburbs turned into a man whom people curse on a regular basis’ (Harriet Veitch).

In researching for this post, I discovered David Astle’s website and blog – both which have been added to my RSS now for titilating reading.

Thankyou, Wheeler Centre, for providing the opportunity to meet in person so many diverse and fascinating people. For free! 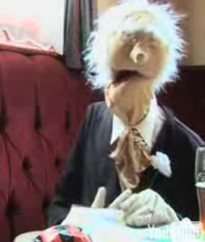 I love the idea of a dictionary created by many people, but Wordia is more than that. It’s a media dictionary created by people sharing their own videos. It’s people talking on video about a word that they’ve chosen. So it’s much more than a definition. Watch Oscar Puppet’s video defining the word ‘buncombe’ and you’ll see that it’s just as much about the person (or character) behind the chosen word – it’s a word definition with personality.

It’s a community of people who, for one reason or another, care about a word enough to spend time making a short film to explain their chosen word. 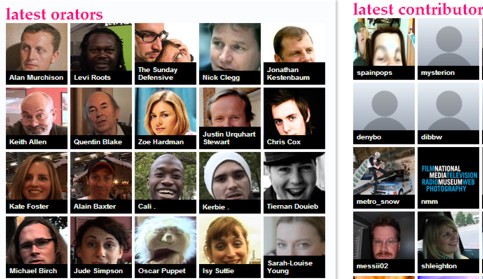 You, too, could join this collection of people who make this media dictionary. This is what you have to do:

Wordia is in beta and is far from comprehensive. There’s something good about a brilliant, new idea in the making, especially when anyone is invited to contribute.

I got sick of searching for words that weren’t there so I browsed using the ‘words’ tab. There’s a list of ‘best words’ and that’s how I came across the definition for ‘fermata’. Very entertaining.

Wordia has it all. Aside from the obligatory dictionary definitions on the page, the list of synonyms, you also get comments from people, making Wordia not so much a dictionary as a linguistic peopleonary.

There are many ideas for the English classroom here. Apart from the kids watching or making their own Wordia clip, you could discuss which videos work best and why, or how the video presentations could be improved, or you could get the kids to choose 5 words they didn’t previously know, or 5 words that sound the most ridiculous, or 5 legal words, 5 words associated with emotions, etc. You get my drift.

Have a look for yourselves and tell me what you think.

Erin McKean does more than redefine the dictionary in her TED talk; she redefines our concept of language. She says that our idea of what a dictionary is hasn’t changed since Queen Victoria’s times – we have the idea that a dictionary contains the ‘good’ words (the ‘real’ ones) and keeps out the bad words (‘not real words’). That’s what she finds frustrating about her perceived role as lexicographer – that she is seen as a traffic cop, whereas she’d rather be a fisherman (yes, she used ‘man’).

But, I hear you say, dictonaries have changed, they’ve come online, they are well connected; they have hyperlinks. Well, according to Erin, an online dictionary has essentially remained unchanged – it’s just a Victorian design with a modern propulsion.

What Erin challenges the audience to do is to rethink ‘good word’/’bad word’. She says when people find a word that isn’t in the dictionary, they think it’s because it’s a ‘bad word’ (think Scrabble), but actually, it’s not in there because the dictionary is too small. The book is not the best shape for the dictionary.

Erin challenges us to look past the artificial constraints of the book-form dictionary; we should study ALL the words. So how do we know that a word is ‘real’? She says, if you love a word, use it. Using it makes it real. It’s less about control and more about description. New words are everywhere, and Boing Boing is an example of the use of ‘undictionaried’ words. Erin suggests we look at the English dictionary as a map of the English language. An antiquated map of the world only contained what we ‘knew’ at that time, but there was much more to discover. As Erin says, when we left out countries in the old maps, we didn’t even know they were missing. So too with words.

And so Erin McKean is in the business of collecting words. She says that words need to be collected with all their background information – a word is ‘like an archaeological artefact’, and ‘a word without a source is like a cut flower – it dies fast’.

Well, I’m swept up by the evangelistic fervour of this New Age lexicographer, but do I dare embrace the new lexicographical freedom and risk chaos? Can we open up the business of word making to the masses when it has traditionally been the hallowed role of unseen word geeks? But then again, Wikipedia has opened up the font of knowledge, and the world hasn’t collapsed yet.

And I recommend Erin’s blog, Dictionary evangelist if you want to discover the unchartered seas of 21st century language. Here, instead of talking about a word’s etymology, Erin delights in its ‘roots, bones, innards, pips, and secret parts’. Or read about the acceptance of new words like ‘chillax’ in Erin’s article in the Boston Globe.

And let’s have some fun with words. To quote Erin, ‘if it works like a word, just use it’.