So finally I can share the RhizoRadio play I’ve been talking about. The best fun I’ve had for a long time. People, you are so much fun! Huge thanks to Kevin Hodgson for doing the hard (and long) work of putting it together so skillfully. Love the music in the background (Kevin’s) – and I’m not talking about the faint violin in the background (my son, Maxim, practising at the other end of the house). The image is also selected by Kevin. Don’t you love all the languages!

I just want to say that if this isn’t a great example of both connected and rhizomatic learning, I don’t know what is. A play shared, an idea, responses, and suddenly people from all over the place are coming into a Google doc where characters are born, educational theory is interwoven, different tongues start speaking and creativity builds upon others’ creativity. Thanks so much everyone. (How many countries were involved in this?)

After writing Mr X loses his battle for objectivity I was overwhelmed by the response from the #Rhizo15 community through comments on the blog, in the Facebook group, on Twitter and Google+ group.

I have to admit I felt elated with so much attention but what really excited me was when Terry suggested it would work as a radio play/podcast.

Hello there. My name is Tania Sheko. Thanks for responding so positively to this short piece of fiction/non-fiction. I’m taking up the suggestion to create something for #rhizoradio (suggested by Terry Elliott and seconded by Simon Ensor) and other suggestions to do a collaborative rewrite eg include a larger cast so we can actually (somehow) create a podcast for #rhizoradio (which is going to be a thing I think). Hope you can join me here!

With Maha‘s well earned influence the Google doc I shared was suddenly populated with #Rhizo15 people (and others?) working together across time zones to hack my ‘story’. So many creative people chatting in the margins of the document about what could work.

It was fun watching the little animal-head avatars popping up at the top as people joined in. Kevin Hodgson shared some an introduction on SoundCloud and then Simon Ensor  did a brilliant reading of Mr X – who evolved into Mr Arborescent (or just Arborescent, as Laura Ritchie suggested). The ‘me’ character was named Rhizoka and the narrator became an inner voice (voices in the head). The ‘me’ character then exposed a muliplicity of identities and even spoke in more than one language.

Ronald created an introduction and Simon did a brilliant Mr X (or Arborescent) in a British accent.

I don’t think it’s finished but I sure hope it actually gets acted out as a podcast/radio play. Thank you so much to all who jumped in – it’s been amazing! It’s still open so come in and contribute. I saw Maha talking on Twitter about who might be able to create the podcast so I hope someone will because I’m not sure about how to do that. 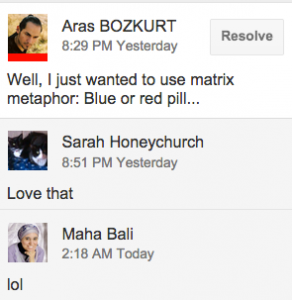 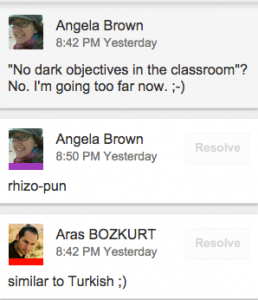 A great way to start #Rhizo15!

Camilla Elliott provides many useful links for podcasting on her Linking for Learning site. I took up her recommendation to subscribe to the ABC’s EdPod RSS feed. Now the latest EdPod audio files are automatically sent to my iTunes every fortnight. Love the idea of getting stuff automatically. It’s like someone working for me while I sleep.

I listened to ‘One long yawn? History in the classroom’ and pondered the podcast. What’s not to like? END_OF_DOCUMENT_TOKEN_TO_BE_REPLACED