I don’t usually make New Year resolutions but I’m considering it. Resolutions pertaining to my role as an educator.

I’ve been spending a enormous amount of my personal time online – either reading, commenting, writing, on Flickr, Twitter, nings, my own 3 blogs, wikis (both maintaining my own and following others), a ridiculous number of groups, and trying to keep up with some of the obscenely long list of subscriptions in my Google Reader. This exercise has been the result of me jumping in, having a go, experimenting to feel for potential.

Next year is hopefully going to be different. I’d like to have more control so that I don’t feel as if I’m drowning, be more discerning and selective so that I’m not as tired or overwhelmed, and always ask ‘why am I doing this?’ and ‘is this adding value to the educational experience’.

Is this a realistic promise? I’m not sure at this point. Although I’ve really pulled back during these holidays, and I feel the benefits of this in terms of creating some headspace, I’ve also recently added Edublog winners’ urls to my rss feed. I’ve talked about not restarting a 365 photo challenge in 2010 but then joined the group EdTech 365/2010.

It’s not going to be easy. It’s going to require discipline and determination.

In terms of integrating technology into teaching and learning, I’m not going to try to change the way people think or behave. Did I really think I could change the way things operate in my school? If I did, then I was deluded. Do I think I can make a difference? You bet I do, otherwise there would be no point in me being there, or anyone else for that matter. But the difference will be in a very small way with one or two people. My resolution will be to stop spreading myself thin while my head is swivelling 360 degrees in case I miss something, and settle on less but with more depth and lots of evaluation.

I’ll make it clearer that I’m not advocating technology for its own sake, that it’s not necessarily always the best platform and, as Maria and I discovered when we taught year 7 English within a ning, it requires many more hours of teaching support and good plain discussion, and even some old-fashioned, hands-on activities, in order to make it meaningful and balanced. Our ning was never about technology, it was about connection and interaction.

On an emotional level – and I’m not sure how I’m going to do this, but it’s worth a try – I hope to take things less personally (that’ll be a first), care less about the details of things, take up fewer battles, respect difference of opinion, and understand that not everyone wants to put as much in, and that’s okay.

For anyone who reads this blog, I wish you a rich and balanced year, with new inspiration and connections with people. Since I started operating within Web 2.0 platforms for my personal and professional learning, by far the most enriching benefits have been the personal connections with people from whom I’ve learned much and with whom I”ve shared even more. Photos courtesy of VIRGOSAMARA. Book title translates as ‘With my own eyes”. 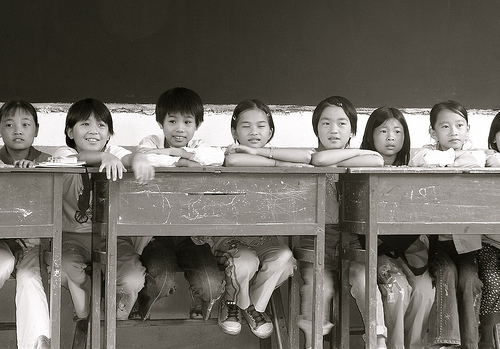 In his book Through the children’s gate, Adam Gopnik said this about children:

Children reconnect us to romance. For children, … every day is the first day of love: The passions that for us grown-ups rise and fall only in exceptional circumstances, unexpected storms on the dull normal beach where the tide breaks unchangingly, rise every day for them. Shock, hatred, infatuation: “I hate you,” they cry, slamming the door, and they mean it; and then the door opens fifteen minutes later for dessert. They compel us to see the world as an unusual place again. Sharing a life with them is like sharing a life with lovers, explorers, scientists, pirates, poets. It makes for interesting mornings.

I like this quotation for a few reasons. Firstly, to remind me of the passionate and immediate nature of young people. If at school they seem indifferent, apathetic, unengaged, then we need to ask ourselves why. We look to ourselves and what we are doing as teachers to make them behave in a way which is actually contrary to their nature.

Secondly, this passage tells me what we can gain from being with young people, what we can learn from them. Our role as teachers is not to ‘teach’ them in the sense of pouring into them what we know better, it is to listen, to bring out, to – with time, the time it takes to know a person – understand where their interests lie, what their passions are, how we can harness their dreams to educational opportunities. We provide the environment, teach skills, encourage and guide, but we work with the unknown – the unknown possibilities of what each young person is yet to create, to achieve.

As I think about returning to school soon, starting along that well worn cyclical path again, I’m gathering together the technology tools that I look forward to using with students, but I’m not thinking about the technology – I’m thinking about the process, the learning and teaching process that will take place. This year I’d like to focus on providing learning experiences which are from people, from communities, learning not from static texts but from living, thinking people – some from other hemispheres – from conversations, comparisons, real discoveries. I’m hoping that this year’s learning will not come solely from one teacher. The net will be cast wide. What treasures will be collected in the net?