This is cross-posted from my other blog, Fiction is like a box of chocolates.

Directed by Tim Burton (famous for Edward Scissorhands, The Nightmare before Christmas, and Charlie and the chocolate factory) and starring Johnny Depp as the Mad Hatter, Alice in Wonderland, due out early 2010 (March 5), has already sparked interest from film-goers who have enjoyed a recent spate of fantasy films, such as Harry Potter, Lord of the Rings, the Narnia series, to mention a few.

Out of all these, Alice in Wonderland is arguably the strangest story, playing around with logic, celebrating nonsense and absurb characters, many of them animals. But how many people know that the original story, Alice’s adventures in Wonderland, was written in 1865 by Charles Lutwidge Dodgson, the author better known as Lewis Carroll. 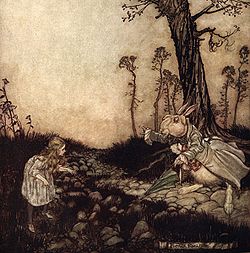 What child (or adult) can resist a story which allows the reader to escape the boredom of daily life by escaping down a rabbit hole, and enter into a world of crazy characters. Did you know that early Alice fans included Queen Victoria and the young Oscar Wilde?

Proof of the popularity of Alice’s adventures in Wonderland  is the fact that it has never been out of print, with over a hundred editions, as well as different theatre and film versions.

Did you know that Alice has also been used in the field of medicine? There is a neurological condition called Alice in Wonderland syndrome, also known as Todd’s syndrome, in which things seem larger or smaller than they really are.

Comics have also been influenced by Alice. The supervillain of the Batman comics, The Mad Hatter, for example. And on TV, the seventh season of The Simpsons included references to the Alice story.

There are many phrases from Alice that have been used in popular culture. How many times has the phrase ‘Off with her head!’ been repeated? And what about ‘we’re all mad here’ spoken by the Cheshire Cat? Another often repeated phrase is the one uttered by Alice when she started growing after trying the cake labelled ‘Eat me’ – ‘curiouser and curiouser’.

Not everybody liked the book. Fantasy writer, Terry Pratchett, didn’t like it at all. And in 1931, it was banned in Hunan, China, because it put animals and humans on the same level, and especially because animals used human language, which was apparently unacceptable!

And who hasn’t read and enjoyed the nonsense poem, Jabberwocky, found in Alice through the looking glass, considered by some to be the greatest nonsense poem in the English language?

‘Twas brillig, and the slithy toves

Did gyre and gimble in the wabe;
All mimsy were the borogoves,
And the mome raths outgrabe.

“Beware the Jabberwock, my son!
The jaws that bite, the claws that catch!
Beware the Jubjub bird, and shun
The frumious Bandersnatch!”

He took his vorpal sword in hand:
Long time the manxome foe he sought—
So rested he by the Tumtum tree,
And stood awhile in thought.

And as in uffish thought he stood,
The Jabberwock, with eyes of flame,
Came whiffling through the tulgey wood,
And burbled as it came!

One, two! One, two! and through and through
The vorpal blade went snicker-snack!
He left it dead, and with its head
He went galumphing back.

“And hast thou slain the Jabberwock?
Come to my arms, my beamish boy!
O frabjous day! Callooh! Callay!”
He chortled in his joy.

‘Twas brillig, and the slithy toves
Did gyre and gimble in the wabe;
All mimsy were the borogoves,
And the mome raths outgrabe.

Have a look at the Disney website for Alice in Wonderland.

Or why don’t you just read the book?