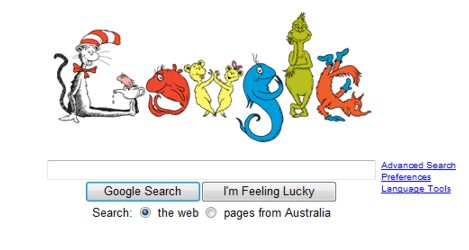 Today is the 105th anniversary of the birth of  Theodor Seuss Geisel, better known to the world as Dr. Seuss. Google has a little tribute.

Random House has a Dr Seuss website for kids. Amongst the fun stuff, there is also a biography. 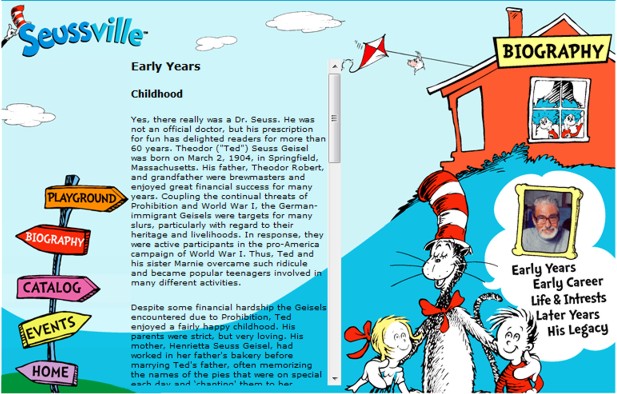 Many children learn to read through Dr Seuss stories. I can’t say I did, although we did have a copy of The cat in the hat. Most children would have read some Dr Seuss, I think, and adults remember the stories fondly.

What is less known is the fact that Theodor Geisel’s early political cartoons demonstrate a passionate opposition to fascism, and that he urged Americans to oppose it, whereas his cartoons tended to regard the fear of communism as overstated. He also denounced discrimination in America against African Americans and Jews (Wikipedia).

Many of Geisel’s books are thought to express his views on a myriad of social and political issues: The Lorax (1971), about environmentalism and anti-consumerism; The Sneetches (1961), about racial equality; The Butter Battle Book (1984), about the arms race; Yertle the Turtle (1958), about anti-fascism and anti-authoritarianism; How the Grinch Stole Christmas! (1957), about anti-materialism; and Horton Hears a Who! (1954), about anti-isolationism and internationalism.

However, I don’t think that’s what Dr Seuss is remembered for. That would most likely be his rhythmic and catchy verse, and his quirky characters.

I’ll leave you with a video of Green eggs and ham to enjoy.