I don’t think it’s been very long since I realised just how much learning happens outside institutions and schools. You might think that it’s obvious but it’s surprising how slowly I shift towards a full realisation of how much learning takes place outside formal learning situations. Don’t we all have trouble freeing ourselves from the idea that our learning should happen at a specific age or in an institution. How worried are parents of very young children when their children aren’t within the expected parameters of normal development? As if they don’t have the rest of their development ahead of them? What about if we haven’t learned something properly in school, for example, I talk about not understanding maths, why do we feel that the learning has to stop once we graduated?

And then Maha says this:

And this coloring outside the lines thing struck me. In a school entry assessment they ask kids to color something in and i am pretty sure they are checking for fine motor skills of coloring inside the lines

And that’s ridiculous, in my opinion. Okay, so not entirely if they just want an idea of how much support the child needs with fine motor skills but why does it have to be ‘tested’ before the child starts?   I feel that things like colouring inside the lines are valued in preschools and schools as some sort of marker of intelligence.  Just for the record, gifted children sometimes have poor fine motor skills, some have disastrous motor skills. I have two stories about my sons. My youngest failed a  cognitive test when he was three because he didn’t complete a drawing like he was supposed to. It was a strange method of testing because I had immersed my children in Russian so at the age of three his English was poor. The doctors decided they would do a test for deaf children which would bypass language.  I remember there was some sort of incomplete symmetrical shape and he was given no verbal clues but it was apparently obvious (to normal children) that he was to complete the drawing by looking at the rest of the thing. I don’t remember it exactly – it was 18 years ago. Anyway, he didn’t get it and took the drawing to a whole new level, extending the unfinished lines to create flowing patterns. It was beautiful. He failed.

My eldest son hated colouring inside the lines. He found it tedious and so, for example, in a picture of a living room,  he would stripe the couch and dot the curtains. Outdoor scenes were declared to be covered in snow.

I took colouring inside the lines very seriously. I was the eldest of two children and fairly typical in terms of following authority. My sister hated it and I would get frustrated if we worked on the same picture, trying to convince her that she was doing something wrong. There was a moral element and I was aware of it. And I saw that again later with parents who used the word ‘good’ to describe children who slept through the night, who sat still, who didn’t make too much noise, and who were obedient at school. My sister used to draw on walls, window sills, her dolls – I was appalled; she was obviously bad  – and she is an artist now. She teaches art and she works on art in her studio. As you can imagine, her teaching is not about colouring inside the lines, and that’s not teaching  just about art.

Here is a photo of my eldest son holding an open umbrella inside the house  – my sister used to do things like that with him eg. giving him an umbrella in the shower – breaking all the rules as she’s always done. 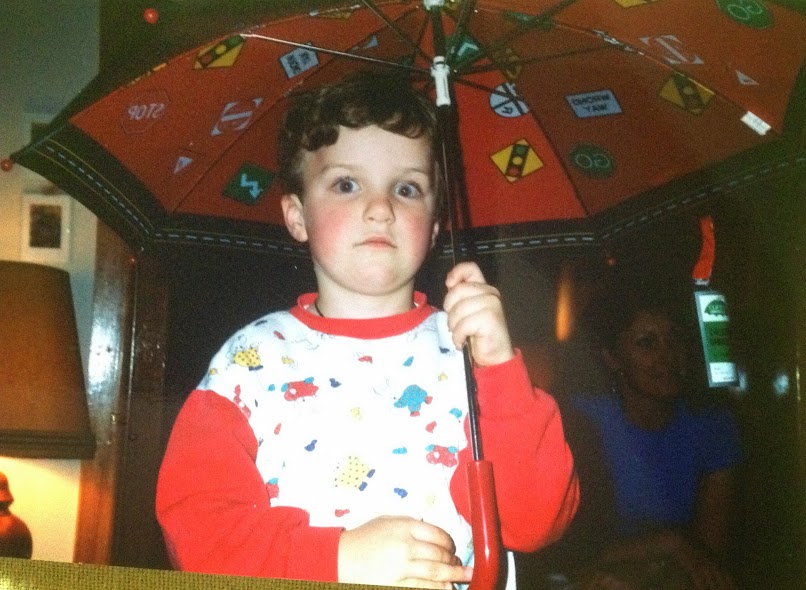 Being relaxed about rules and regulations is not something natural for me but I’ve been working on resisting my inner voice which compels me to colour within the lines. It’s an ongoing process.

Some children are naturally wise and instinctively understand not to take the “colouring outside the lines” rule too seriously.  Hence Maha’s observation:

I remembered something my mom noticed about my child. She said she started coloring inside the lines, then said “ok, i’m now done with that” and proceeded to color outside in broad strokes

I suppose, as Maha says, we work in institutions so we strike some sort of balance in working within the lines of our institutions and breaking out when we feel it’s essential. I think much of my throw-away lines to our students in the library are jokingly anarchistic. I’m joking but I also want to shake them up a bit if they’re too stressed about their homework and exams, break up the tightness and inflexibility of the way they see their lives panning out – they study very hard, get the highest marks possible, get into the whichever faculty is prestigious or profitable at university, and then live happily ever after. Many of our students start to break up when this very prescribed plan goes awry because there is only one path, they cannot step outside the lines. It’s a dangerous, inflexible mindset.

Thanks, Maha, for the invitation to write out thoughts on this topic. I was getting bogged down in guilt and non-writing  because I hadn’t managed to do the prescribed #moocmooc readings – despite the fact that we’ve been given permission not to – but that old battle with following instructions and rules is not easy to break.