For the first time in our history, we’ve made a brand video to express what our place is on this earth. We believe that the need to open up and connect is what makes us human. It’s what brings us together. It’s what brings meaning to our lives.

How do you like it? The point of Facebook is not the technology but the connections between people, global connections. Absolutely agree with that.

“Chairs, doorbells, airplanes, bridges – these are things people use to get together so they can open up and connect about ideas and other things.”

Okay. Starting with a chair is quite clever; a chair (or seat) is one of the simplest cross cultural symbols and has existed for centuries.

“Dance floors, basketball, a great nation. A great nation is something people build so they can have a place where they belong.

So now Facebook is getting a teeny bit ambitious perhaps. Or are they, considering their place in world populations? Here’s an infographic comparing Facebook’s population with that of the most populated countries in 2010. 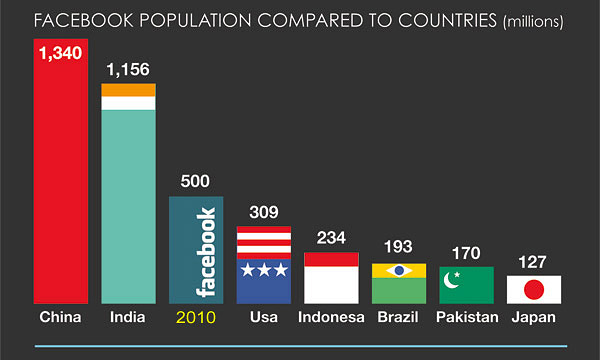 Here’s an updated one showing Facebook’s population in a different context. 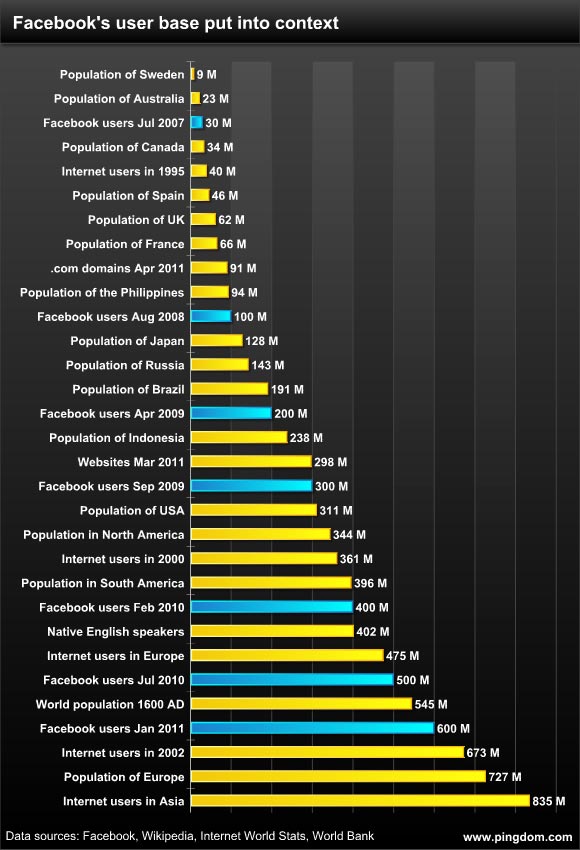 “The universe – it is vast and dark and makes us wonder if we’re alone. the reason we make these things is to remind ourselves that we are not.”

Facebook – really? Suddenly you are the answer to the world’s ontological questions? Get real, please.

Mashable posted its reaction to the video:

Mashable editor-in-chief Lance Ulanoff previously pointed out what he thinks is wrong with the ad: confusing analogies, absence of technology and a plethora of vagueness that spoils an otherwise beautifully shot commercial. “It was created to celebrate the social media platform’s 1 billion active monthly users and my takeaway is that Facebook is an empty chair,” he says.

And then spoofed the Facebook ad with this image –

I don’t know about that one either. It leaves me luke warm.

Don’t get me wrong – I use Facebook a lot. Despite the frustrating, intrusive and changeable nature of its dealings with users, it’s still one of the most effective ways to communicate both personally and professionally. Connections are great – it’s what you make of them. As a teacher, you have a love-hate relationship with Facebook. It’s unwise to befriend students but, knowing they’re there, it’s the place to set up groups that students will inhabit – because they’re already switched on. Most of the time.

Good try, Facebook. Maybe you should get some user feedback for your ads before you decide on the best one.