Yesterday, Alec Couros went “Back to School” to “Meet the Teacher” of his first grade daughter. Here is what he saw: 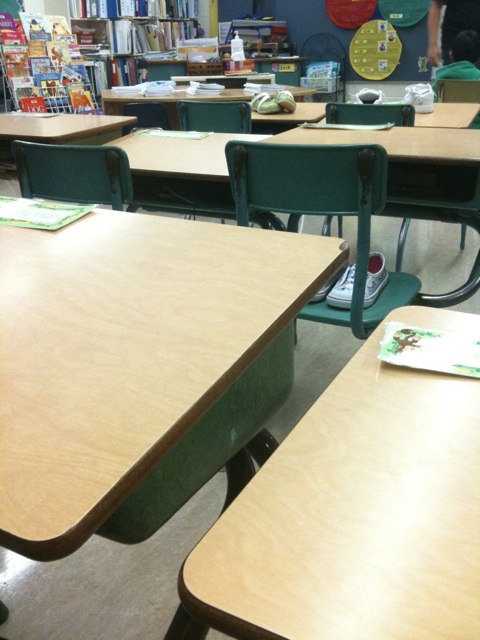 Photo by Alec Couros (from Weblogg-ed)

Both Will and Alec have children in school or about to start and feel pretty much the same way about schools which seem so traditional that they have been left behind in the Industrial Age (my interpretation).

Will’s post nails the problem for some parents (are most of these teachers themselves?) when school isn’t the ideal place to educate their kids. What do you do then?

Will has captured the Twitter responses to Alec’s initial tweets and they are definitely an interesting read.

I agree with you, Will – this tweet expresses my own view of my sons’ schooling:

“We’ve always considered public school ed our kids receive as supplemental to the ed we provide at home so we don’t go crazy about it.”

I’m writing from the perspective of a parent who has been though a few hells and come back to review school education many times. My boys are now in second year uni and year 10. I’ve never expected school to be responsible for all the learning or to contain the most important learning for my boys. Or did I understand that gradually? Did I expect more and come to accept less? Yes, I think so.

I am not about to criticise all schools, all teachers. I’m a teacher and far from perfect. I would not like to be a principal. So when I say that schools have been less than what they could have been, I just think that the talent and dedication which many educators display every day could be better directed with an informed view of the kind of learning which truly prepares our kids for living and working in their world. We are not preparing our kids adequately for their future because we are not projecting our goals into their future – we are clinging to our old perception of what we need to teach them.

A few things that spring to mind throughout the years my boys were at school:

1) gave him extra work which he didn’t want to do, and then told me he wasn’t cooperating

2) devoted all further discussions to pointing out that he wasn’t like other children, and that he should concentrate on fitting in

3) placed all importance on social skills (his apparent failure to be like everyone else) and ignored the academic aspect. (Let me say that pointing out to a child that he is different and that this difference is somehow a handicap, is not going to help his social skills. Telling him to dumb down, as the school psychologist did, is also not going to help)

I just want to say that I also have many excellent memories balancing out these not so positive ones, and these centre on wonderful teachers. I’m not painting an entirely black picture but still, if I had to estimate how much of school I thought was truly valuable, I would have to say that there is so much I would have done without, so much I would have done differently, so much wasted time. But it’s worse than wasted time, it’s the turning away from a natural love of learning. Sometimes I think that my children, my students, are successful despite their schooling, not because of it.

My younger son absolutely lives for music and wants to be a comp0ser. He is happy this year in his new school, The Victorian College of the Arts Secondary School, in year 10, where he follows the same academic curriculum as in other schools but also benefits from expert tuition and performance experience in music.

How do I remember most of his schooling before this? Apart from his two final years in primary school when he had fantastic teachers who did wonders for his love of learning and self esteem, the first 3 years of secondary school were times where he had to put away his burning desire to compose and play music because he spent almost every waking moment completing homework tasks. Granted, some students would have either done the same more quickly or not been as conscientious, but the hardest part was seeing him develop an aversion to learning and a low opinion of himself as a learner. That’s difficult for a parent.

In retrospect, I would perhaps do some things differently. I like the way Will and his wife communicate with the teachers:

We write an e-mail (or a letter) to each teacher introducing our kids and ourselves, letting them know what our hopes are, what we’d love to see our kids doing, and what we’ll do to support the classroom. We also introduce ourselves, and talk a little bit about what our worldview of education looks like. Finally, we offer to continue that conversation and help make it a reality in the classroom in whatever way we can. And we cc the principal and headmaster (since Tess is in private school.)

I think you have to work hard to develop a positive relationship with teachers and principals. I gave up too easily in situations when a teacher responded in a defensive manner, particularly when it meant resenting my child. In this case I withdrew, fearing the repercussions for my child, but now I might hold my ground a little longer and try not to take the whole thing personally. The parent/teacher relationship can be delicate.

Certainly I have always taken a very active role in my children’s education, and I’m not referring to basic literacy and numeracy skills, but to opening up their minds to bigger picture questions, providing them with resources and activities within their interest areas.

I wonder how differently teachers would teach without the sometimes crippling restrictions of curriculum, if there was time to discuss what they thought was most important and without the looming university entrance scores.

Despite all this, I think that, if I had the chance to do this again, I would still not choose homeschooling – which is not to say that I think it doesn’t work. My husband and I always felt that being part of a school community was important for our sons, and finding your place was also important.

Katie Hellerman was also inspired to write a post after reading Will Richardson’s, and it’s a good read.

I would love to hear from you about the topic of schooling and learning. Do you think schooling prepares young people adequately, well? If not, how would you reconfigure schooling?