For this Make Cycle, we invite you to use game design to analyze, remediate, and reflect on complex systems. Last week, we noticed “the affordances and constraints that each medium offers (for and against) our purposes”. This week, let’s discuss what systems we see – and what happens when we change up the rules a bit.

Life is a complex system.

That’s why I wrote about life being a game – or not – in a previous post. I wanted to engage with people in different spaces so I shared the post on Facebook, Google+ and Twitter. And the additional space – the Google Doc. I was tempted to add a Hackpad but was interrupted by a couple of tugs on the line. How to play in different spaces almost simultaneously? And then Terry Elliott created the Hackpad for me – a response to my piece using James Carse quotes. That was an interesting approach – playing the JamesCarseGamesBot. I’m still getting my head around Hackpad and its rabbit holes. And although people didn’t end up finding it, I appreciated Terry’s time taken and the flashlight he shone on isolated sections. I wonder what it would look like if others had come in. Terry knows that potential will not always be pursued, and he opens up possibilities often despite this.

You must leave this space to see my thread of the answer. For some this will be too much to ask. So be it:

I am the Carse Infinite GameBot and will be answering these questions in random order over the next 24 hours. Some questions I will not answer. Perhaps there will be a hidden message, perhaps it will be unintelligible. Ready player one?

So I guess I’m player one.

We invite you to use game design to analyze, remediate, and reflect on complex systems. So I’m not a gamer – that is, I usually avoid games like chess (can’t play it) or any strategic games which make my brain hurt; sports games; game shows; Scrabble, Monopoly, etc. Why? I don’t know. But I LOVE word games, language games, open-ended games, creative games. If I were to analyse the complex system of life in a playful way – in a gameful way – I would make sure that there were no rules that could not continue to be written. (Was that a double negative? So then I mean that the rules should evolve and be written and rewritten by any and all players). First of all, I really do think life is a game. There is no single correct way to play but many rhizomatic possibilities. You need players, so you play with others. And playing means practice, that is, you play one way, and then you play another way. Like drawing, and drawing another version. It’s complex; you can’t do it in one drawing. You need people. It’s the game of life.

While I was thinking I didn’t want Terry’s Hackpad version of my Life is a Game rant left unplayed. Threw a few things in. If you like, take a look here. I’d love you to play.

The Google Doc is play too. Thanks to you if you came in and played a while. It’s all generosity as far as I’m concerned. People adding creative responses to your work – it’s a gift. Thank you. 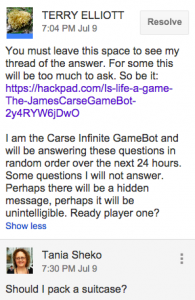 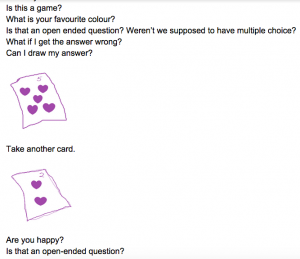 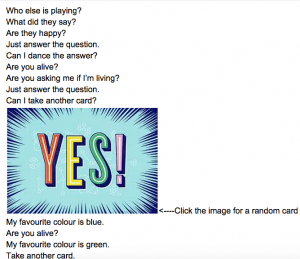 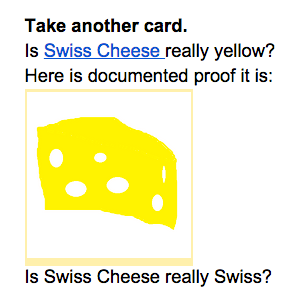 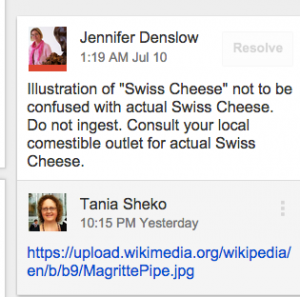 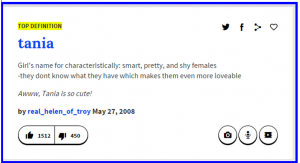 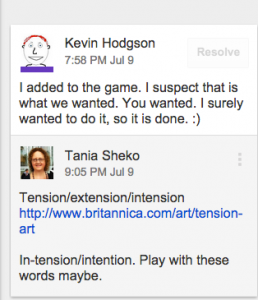 See what comes of play? I do like games after all. Thanks for playing.