and this link to Smartmobs, a Website and Weblog about Topics and Issues discussed in the book Smart Mobs: The Next Social Revolution by Howard Rheingold.  Here you can read Twitter: Following the Aftermath of the Iranian Election,

Twitter appears to be one of the most reliable channels to receive a first-person account of what is happening in the aftermath of the 2009 Iranian “election”.  Tor Henning Ueland is actively compiling a a list of Iranians using Twitter.  Also, you can follow the realtime results for the #iranelection here.

The power of microblogging is obvious here. Twitter has moved to a crucial role in communicating news when other forms of communication, such as official news, mobile phones, sms chat, and websites are no longer functioning. Twitterer @Persiankiwi is being followed by many, many people – 4,916 when I last checked. These are the sorts of things he has tweeted:

websites being shut down fast. having trouble accessing tweeters. #Iranelection20 minutes ago from web

advice to people joing march. tavel toether with friends. do not travel alone. keep track of friends. #Iranelection26 minutes ago from web

I’ve selected other tweets which give current updates on the situation in Iran, as well as the urgency of the people.

hckggren RT persiankiwi
nR: RT @persiankiwi My twitter was hacked. am back in again. they are shutting down all internet services. #Iranelection
@NorwAnon They insist to take exam to show e.th is normal. No news about our exams but if I’ll tweet it!about 3 hours ago from Twitstat Mobile

It’s 4th day that SMS service is down. #IranElectionabout 3 hours ago from mobile web

I have an exam @ 14 (At national time). I’m a little worried, ppl are going to street again tomorrow morning and afternoon!about 10 hours ago from Twitstat Mobile

RT @mahdi @keyvan: Oh oh! Hearing that they have brought tanks to cities!about 13 hours ago from Twitstat Mobile

RT @StopAhmadi It’s getting rough in Rasht tonight. Armed forces waiting for ppl to make their move to beat them #IranElectionabout 15 hours ago from Twitstat Mobile

RT @HatefRad They arrested Guilan university students and took them to an unknown place! #IranElectionabout 16 hours ago from Twitstat Mobile

I can’t find my friends on streets.about 17 hours ago from mobile web

Mousavi’s meeting with the Supreme Leader http://bit.ly/si7rq (via… http://ff.im/3ZxBNless than 5 seconds ago from FriendFeed

RT @reuterswire Ahmadinejad due in Russia on first trip since vote: YEKATERINBURG, Russia (Reuters). http://tinyurl.com/mt7bpkless than a minute ago from web

RT: @alirezasha: lost in lots of rumors and lies in news/چرا نمیشه به اخبار اعتماد کرد؟about 1 hour ago from TwitterFox

RT: @Change_for_Iran: We’re trying to stop Masood from going outside! there is no way they will listen to us right now. #iranelectionabout 9 hours ago from TwitterFox

RT: @Change_for_Iran:typing as fastest as I can in bth English&Farsi,Still we need outside help,I really don’t want to be captured by Ansarabout 9 hours ago from TwitterFox

URGENT GET THIS OUT TO IRANIANS: ghalamnews confirms mousavi & karroubi WILL BE AT MARCH IT IS ON 100% AS OF NOW #iranelection2 minutes ago from web

RT @persiankiwi please tell all – march is NOT CANCELLED today. Mousavi is in danger of being killed. #Iranelectionabout 1 hour ago from web

Many roads are blocked in Tehran right now, it is like martial law out there right now. Government is panicking #iranelectionabout 1 hour ago from web

intrepidteacher No matter what happens nothing will be the same in Iran again. I have been waiting for this my whole life. #iranelection 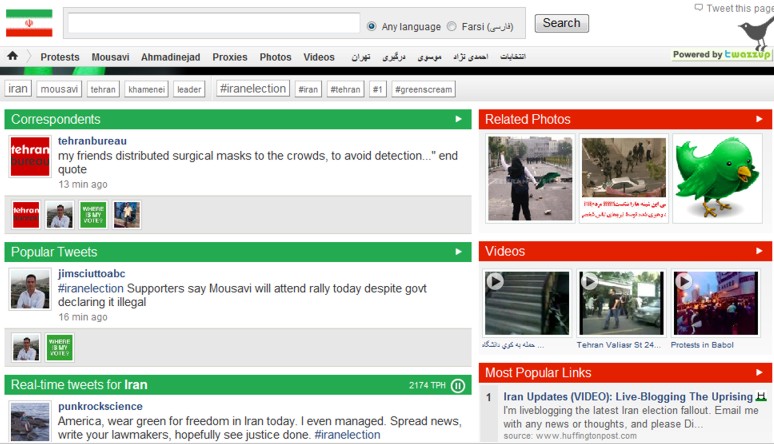 Many pictures have been posted. Here are a couple:

Here are more videos and pictures of demonstrations in Iran

I’m following developments on Twitter about the situation in Iran with interest – regular updates and personal information from people who are in the thick of these riots make this kind of news more dynamic than news from a traditional source. This is the new journalism.

This is very disturbing. I could read the updates all night, but I’m going to stop. Here is the last tweet I’ve read:

RT @drewb : #Iranelection web blocks via @IranPishi : “cant update topics on twitter anymore.cant open any webpage. hope you can see this.
You would have to be shortsighted to have read these developments and not recognised the role Twitter has played in new communication possibilities.