Drawn has plunged me into childhood nostalgia by compiling an archive of cereal boxes. There are 100 of them on this site. I don’t think we had a lot of these in Australia. 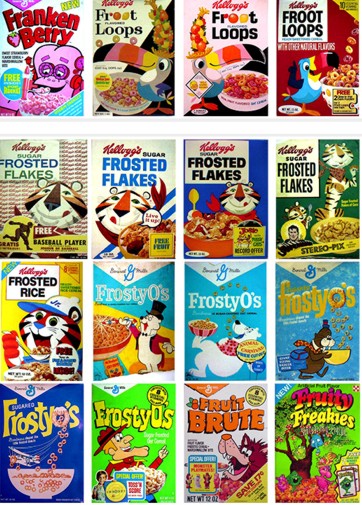 There’s something smile-worthy about the cheery, colourful graphics of cereals past. Even though I don’t recognise many of these, and despite the fact that most of these were forbidden, the happy times of simpler days still shine through these colourful graphics.

I wonder how many people remember a childhood of uncensored cereal-eating? Was it the norm to eat these sugary breakfast treats? My childhood was a mixture of ‘the norm’ and not. Yes, I was allowed sweets, even fags, and no, I wasn’t allowed fairy bread for school lunch, but had to eat doorstopper sandwiches full of ‘disgusting’ fillings that would now be popular in trendy cafes. I wasn’t allowed to watch things on TV that many others were so I couldn’t talk about these shows in the playground. I wasn’t allowed to play in the street. I didn’t have free weekends at a time before children’s lives were so overcommitted, but went to ballet and Saturday Russian school.

Different. You didn’t have to feel different. You could walk around in your jeans and miller shirt and talk about Number 96 on TV, you could stay at your friend’s house instead of crying crocodile tears over your Russian homework and going to play rehearsal for The Governor Inspector.

So we were talking about not fitting in during childhood, and I talked about not letting him watch The Simpsons in primary school, not because it was ‘bad’, but because childhood was too short not to savour the innocence of TV, film  and literature written especially for children, and because a very young child cannot understand satire. He said he didn’t understand it then, but he understood it now. I told him that a parent who made the decision to be selective about a child’s early experiences also suffered when it meant that the child couldn’t talk about popular TV shows (Big Brother) in the playground, couldn’t talk about computer games that were out of bounds. It really was hard. And he said he’d survived; he didn’t think there was anything wrong with him, he was his own person, stronger for standing out.

Sometimes when I see parents of young children agonising over choices – wanting to make all the right decisions, but torn between the possibilities, I want to say –  Go with your gut feeling; if you take something away, then replace it with something else that’s wonderful; talk about everything; respect your children’s viewpoints; don’t be afraid for them to be different.

When they grow up, differences become attractive, being your own person is respected, strength lies in being true to yourself.

When we look back at past cereal boxes, none of us ate all of them, but we share the memory of the collective culture.

I was talking to my son today about our early conceptions, and we shocked ourselves about uninformed and xenophobic ideas we had of people and cultures when we were children. My primary school years situated me in a very narrow place, although not as narrow as some, since I did come from an ethnic background. These are very interesting times because we are developing and learning like crazy but we don’t have a great deal as points of reference, so our learning is coloured by our often incomplete or erroneously formed concepts. To put it another way, what information we do gather is not always correctly understood and is even reconstructed by our own imagination. I say imagination because you need a great deal of it to fill in the gaps between the isolated pockets of knowledge and understanding.

So, I remember growing up with Australians who were either ‘real Australians’ or from a European background (Greeks, Italians, Macedonians) and Russians from my own cultural group which was always a minority (and none at school). Since I loved to read, my knowledge in these days was gleaned from books, most of which I owned and some from libraries. Information books didn’t seem to abound, and picture books were often teachers of the world beyond my own. I remember learning about dark-coloured people with grass skirts or slanty-eyed people, people living in teepees or igloos or swimming underwater every day. Now, that’s not a deliberately racist description because, since my information was delivered through a visual medium, my knowledge of these people was almost entirely visual. And not a realistic depiction but usually a cutesy illustration.

Now we take it for granted, but a little context to information is just a click away on the internet. Google Earth or Maps would have given my little snippets of information of other cultures a geographical location, and joined all those floating, isolated bits of knowledge into a world map; Flickr could have given me an easily accessible collection of pictures. Of course, information books with photos abound, even picture books with beautiful photography which deliver early aspects of reality to the preschool child.

How has this affected my development of knowledge? Do I still harbour distorted ideas of the way things are in the depths of my subconsious? Or have I worked hard at reconstructing and revising the way I see and understand things? Is this a blessing in disguise, a constant practice for maintaining elasticity and flexibility in the course of life and my understanding of it?

Meanwhile, I remember my picture book worlds with nostalgia. I used to imagine myself in the pictures, and dreamed of living on the little island where the smiling grass-skirt girls lived, so tiny that you could walk it in a couple of minutes, always sunny, water crystal clear, fish and birds abounding, all things provided for idyllic living. Did you wish you lived in any of your picture books?

Thinking about the point of Book Week made me think about reading, and sparked a mental journey through my own book and literature memories:
being read to in bed, listening from my playpen to my grandmother reciting Evgeniy Onegin while she sewed her way through thousands of shower caps for her boss, reading to anyone who would listen as a young girl waiting for her mother’s perm to be done at the hairdresser’s (Cornelius) in Camberwell, re-reading my favourite books and poring over the illustrations, not understanding why a girl in my primary school class was forbidden to read by her mother, dreaming of being an author, choosing all literature subjects in different languages at university, learning languages to read the literature, reading to my children, translating an English picture book into Russian to my toddler while simultaneously watching Neighbours (go figure), deriving so much pleasure from buying all the old classics for my first child before he was conceived, rediscovering these books with him, listening to children’s audio books in the car, passionately discussing wonderful books with students as an English teacher and trying to ‘convert’ the unbelievers , delving deeper and deeper into literature with students, challenging students and making them think, watching students come into the library to ask impatiently if their favourite book had been returned …

What are your literature memories?

I wanted to reply to a colleague’s blog on the subject of children’s books and childhood memories, but while I was searching flickr for a book cover that was under the Creative Commons category, someone else emailed me, wondering how to add a flickr image to the blog. Yes, I know I’ve done it, but that doesn’t mean I can remember how. In fact, the first picture I inserted was a simple matter of copying and pasting, and that was so easy, I’m wondering whether it was the wrong way to do it. This time I’m repeating the other way I did it, which was to click on the flickr image so that the picture had its own page, then click on the ‘blog this’ icon. I’ll see if this works. I love the way this is demonstrating learning – we don’t necessarily learn from the first time we do something. Doing it a few times, and especially trying to teach someone else, makes it stick. Having said that, I hope I remember it next time I get frustrated with a student who ‘has been told’ and who’s forgotten.

By the way, the picture is from one of the children’s books I remember from my childhood. Since I didn’t speak any English until I went to kindergarten, all of the books read to me by my mother and grandmother were in Russian. Looking back, I realise that I owe to these children’s books my love of bright colours (often strangely juxtaposed) and of the bizarre. Strange characters come to mind from the recesses of my mind – crocodiles in suits smoking cigars, a muddle-headed man who reminds me of Mr Bean, a giant, menacing sink (more  like the whole vanity) with human features who bullied the boy who wouldn’t wash (Soviet moralism).