This has been reposted from the Melbourne High School Library blog. 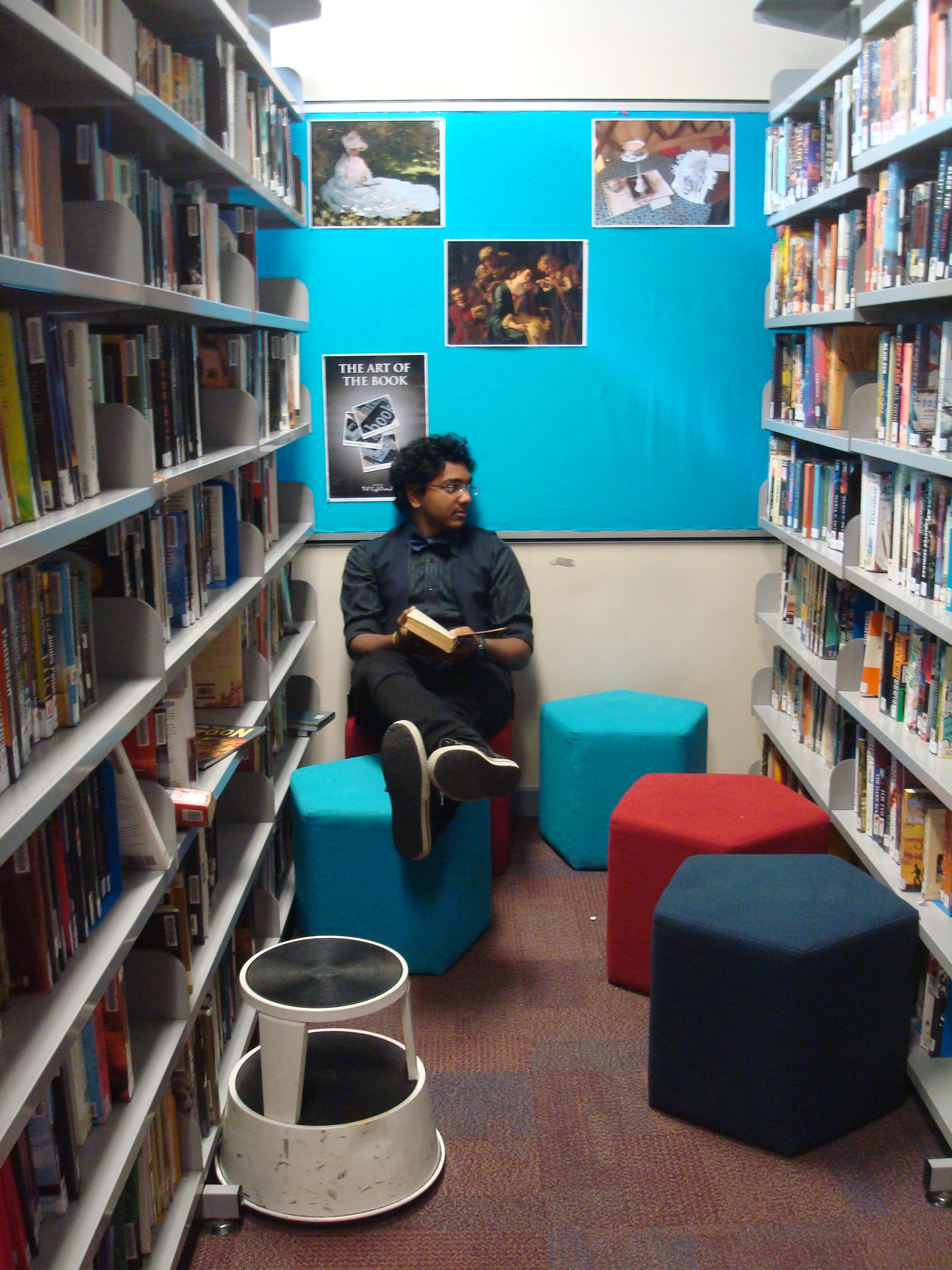 What are you reading at the moment?

I’ve started The Hunger Games – I’ve read the first one & the third one [Mockingjay] & I’m reading the second one at the moment [Catching Fire] – it’s not really confusing reading them this way, it makes sense – for me. The first one was really involving & engaging; the third one is better, but darker. I’ve also started reading Shiver  [Maggie Stiefvater], it’s about vampires & a bit chick lit, but I like it.

What was you first reading memory?

It  would probably be reading TinTin & Asterix  – I read them all. They’re really funny – I didn’t actually pick up on all the puns in Asterix at the time, but I looked through them again when I was older – all the way through, they’re all puns. They’re so good. I also read Star Wars books & Aussie Bite stuff, too. I remember in kindergarten correcting the teacher for skipping out parts of the stories that were being read to us – that really annoyed me.

Where’s the most unusual place that you’ve ever read a book?

That would probably be while walking – in Year 3 I got into trouble from my parents & teachers because I was walking upstairs reading – I literally was reading while I walked everywhere. I never fell or tripped – you get used to it.

What book / story has made a lasting impression upon you?

The story that has made a really great impression on me because I didn’t like the character was probably Perfume [Patrick Suskind] – it was horrible & I couldn’t get it out of my head. He was a totally psychotic character & his actions were disgusting. I don’t really want to remember it but can’t help it.
There are a few books that I remember in a positive way – Harry Potter, for example, & The Hunger Games will stay with me because it’s so realistic – the third one in particular – and I can really empathize with the characters, especially the main character even though I found her really annoying at the same time. I felt the same with His Dark Materials [Philip Pullman] – I felt a great deal of empathy with the characters & felt quite depressed at the end.

Thanks, Sai, for sharing your reading background with us, and to Denise for the interview and photo.

It’s always good to have an excuse for peeking into young minds in terms of what they’re reading, probing their earliest reading memories. We’ve been featuring our Reading Ambassadors in the Melbourne High School blog – except for the first who wasn’t keen on being published.

You can read the interviews with Padraig Gilligan and Alan Ng; you won’t be disappointed.  My favourite discoveries in these interviews are the idiosyncratic pieces of information such as Padraig’s comment:

I really enjoy reading on trains because even if you don’t get a seat, which is sometimes not an option, you have these nice little chronological markers – in the form of the stops & stations that you go through – so you know how long you’ve been reading & how long you have left to read. 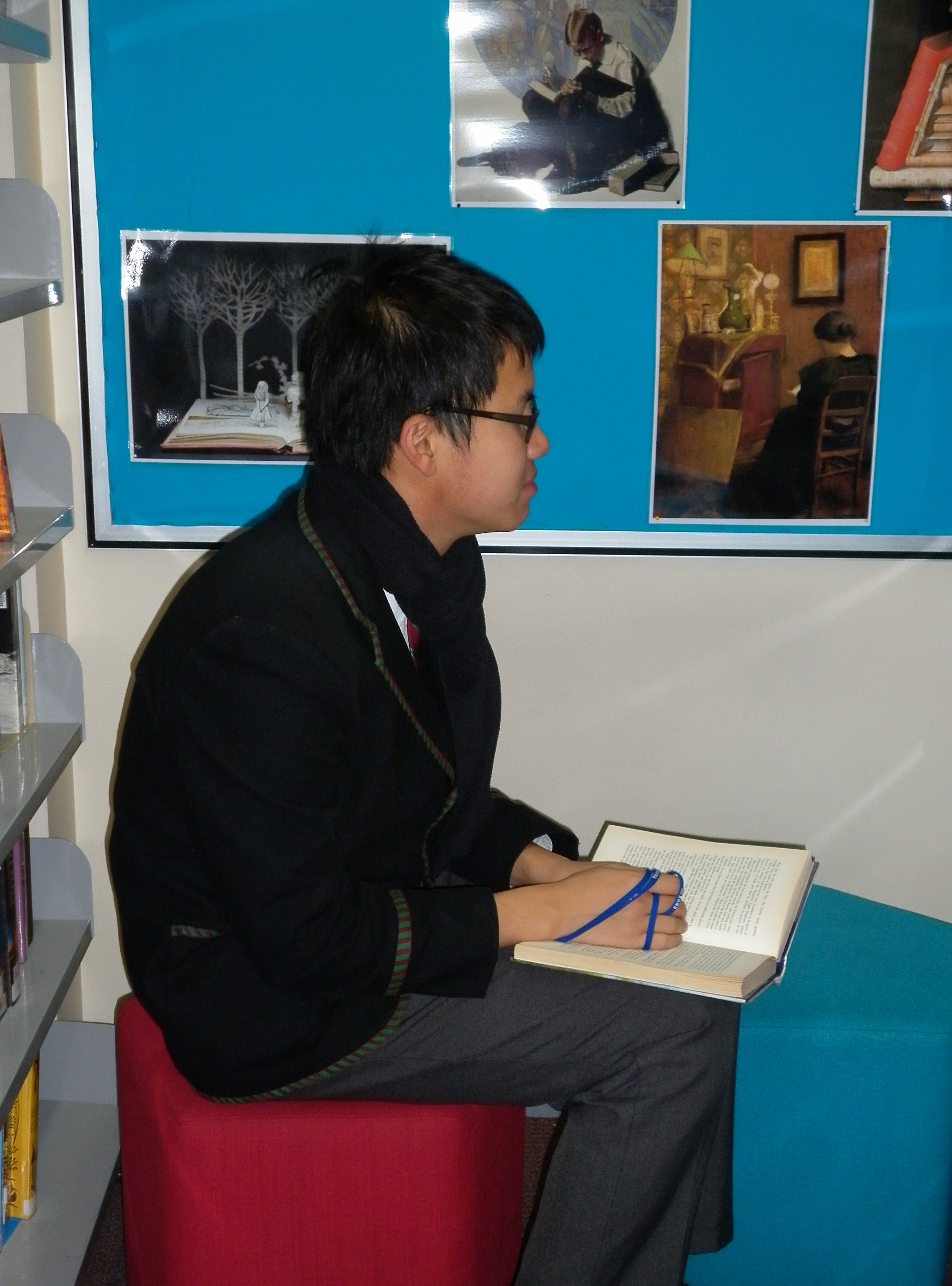 Sitting in an airbus A320 at 2 o’clock in the morning on the way to Thailand for a holiday – a reunion with relatives. The book was Doctor Faustus by Thomas Mann. It was very difficult to read the words, it was really, really packed & I’ve got to admit it was really hard to read. But I finished the book – it was confusing but consuming.

You really can find out a lot about people by what they read if you ask the right questions!

If you think about people who are a constant and inspirational support in your professional life, you know that you are indebted to these people on a daily basis.

I’ve decided to feature an interview with Judith Way, a Victorian teacher librarian who has made a significant difference in the professional lives of teacher librarians and others, and whose unassuming, friendly nature has endeared many, both in Victoria and globally.

Judith’s blog, Bright Ideas, which she writes for the School Library Association of Victoria, is one of the first things I check daily because I know that she is on top of what’s happening in the world of education. Although she may not need an introduction since so many are connected to her through the blog, Twitter and OZTL-NET, to mention only a few platforms, I’ve included a short biography as an introduction to a recent interview I conducted with Judith.

Judith Way is a teacher-librarian with a Graduate Diploma of Children’s Literature and a Master of Arts. Recently she was recognised for her work with the Bright Ideas blog through the  2010 IASL/Softlink International Excellence Award .She has also been the recipient of the School Library Association of Victoria’s John Ward Award for outstanding contribution to teacher librarianship in 2007 and the SLAV Innovators Grant in 2009. She was awarded the Children’s Book Council of Australia Eleanor E. Robertson prize in 2003. She has presented at conferences locally and internationally. Judith writes the Bright Ideas blog for the School Library Association of Victoria.
How did you come to create and write the Bright Ideas blog?

Due to the success of the School Library Association of Victoria’s Web2.0 online program in 2008, there was a real momentum for more online resources for school libraries, and the idea that schools would showcase what they had developed to encourage others was a big part of that. I was honoured to be asked by SLAV to write the blog on their behalf. I had undertaken the ’23 things’ course through Yarra Plenty Regional Library in 2006.

What were your initial thoughts/feelings about the blog?

Excitement! What a fantastic opportunity to delve into the web 2.0 world and see what we could all make of it in school libraries.

Was it difficult to take the first steps in creating a blog identity and developing a readership?

The first thing was getting a body of work up on the blog. No-one is really going to read a blog with one or two posts on it, so building it up was vital. I then promoted it via the OZTL-NET listserv and down the track joined Twitter. That really developed the readership. Then I joined the ILearnTechnology blog alliance in January this year and that furthered readership again.

What were some of the difficulties you experienced along the way?

School library staff tend to be a modest bunch, so encouraging people that their web 2.0 efforts should be highlighted and shared with others was a challenge.

What were some of the highlights?

Getting lots of positive feedback from readers, especially in relation tothe school library examples that were shared.
Last year Bright Ideas also had the honour of being voted the “FirstRunner Up” in the Edublogs Awards for the ‘Best Library blog”. What a fantastic vote of confidence that was.
Notching up 200,000 hits earlier this year was also a terrific milestone and it was an unbelievable recognition to be awarded the 2010 IASL/Softlink International Excellence Award in September.

How is the role of the teacher librarian changing, if at all?

In one way it is changing dramatically. In another way, it isn’t changing at all. What do I mean by that? We are facing enormous changes in the way we present learning opportunities to students. Social media and eBooks have changed the landscape for many school libraries. But we still want to teach our students how to research well and to love reading- whatever the medium.

What would you say are the most important goals of the teacher librarian/ of educators in general in these times?

To remember the power you have to make a difference to the lives of your students. You have the ability to be a positive role model in terms of using information well, both content and morally. To teach students how to make a positive digital footprint and how to be cybersafe and cybersavvy. To pass on the love of reading. These are lessons they will carry throughout their lives.

Thanks, Judith, for your thoughts, and also for the untiring support you provide for teacher librarians and educators everywhere.

Babelswarm is Australia’s first Second Life arts residency. Recognition of 3D Multi-user Virtual Environments (MUVEs) as a medium for serious art work comes in the form of a grant of AUD 20,000 from the Australian Council, the biggest grant to be awarded for Second Life work. Here’s what the creators of Babelswarm have to say:

‘We will collaborate to develop an inter-disciplinary artwork in Second Life, which converges possibilities of literary, music/sound art and real-time 3D arts practices within the virtual world. There will be a simultaneous installation in Second Life and in a real world gallery, where gallery visitors can be directly involved in its creation via a voice-driven interface”.

It sounds amazing. If you want to go there, you can teleport in.
Here’s what Radio National had to say.
Have a look at the Babelswarm Flickr group.
Desktop magazine asked creator, Chris Dodds of Icon Inc, about his second life and creating virtual art in a virtual world. Dodds answered, “The grant recognises virtual worlds as legitimate environments for artists to work and create in and, while some artistic institutions already have a presence SL and a few have offered residencies, the $20,000 Australia Council initiative is the biggest of its kind.”

“This work, called Babelswarm, will consist of a real-world gallery installation and SL-based interactive sculpture. Participants from both the real world and SL can speak to the artwork and have their words translated into virtual three-dimensional letterforms. These letters then tumble from SL’s sky via a complex set of scripting and voice recognition software. The more words, the higher the tower becomes. The work is to be viewed in a gallery via a wall-sized screen, and in SL by proxy of an avatar. Both real-world and SL-based participants can interact with the work and communicate to each other through the artwork, and the work investigates real and virtual entanglement, language and interaction.”

The work will be launched as part of another Second Life project that Dodds is working on – the Australian Centre of Virtual Art (ACVA). Through this platform he’ll run galleries, host events and develop a permanent archive of virtual art.

Here’s something that Dodds said that made me sit up and listen, “Icon is interested in virtual worlds as the next social and business interface, and we’re formulating a number of ideas. Virtual environments are the next logical progression for mass interaction and collaboration and we’ll be there to enjoy, and hopefully influence, the ride.” For those of us who think that Second Life and other virtual worlds are just games, we should think twice.

“The next decade will see MUVEs having a profound impact on business practices, governance, law, economics, personal relationships, security, anonymity and our overall sense of self and place,” says Dodds.

That’s something to be reckoned with.
I showed my 18 year old son this article. He said, ‘I don’t like it; truth can be controlled in a virtual world’.
Any thoughts?