Before I bought my iPad, people would ask me what I planned to do with it. Why was I spending so much money? Was I certain it was worth it? How was the iPad going to be different from a notebook? Should I buy an iPhone instead?

I couldn’t answer any of these questions with any certainty. That’s why I was buying an iPad – to play, to gain an understanding of what an iPad enabled me to do, to figure out if iPads played a role in the changing face of learning in schools.

There’s nothing wrong with putting forward a suggestion before you have all the answers. I didn’t and don’t have all the answers for iPads in education, but I don’t want to wait until the time when it’s safe, when the majority of educators have understood the value of iPads and accepted their place in schools. If I wait that long, I’ll be on the tail end of a movement that doesn’t stay still. I won’t be a forward thinking educator but a safe follower who calls out for others to wait up.

If I waited until I was sure, I wouldn’t be where I am now. Where am I now? I’m on the road to finding out. The iPad apps session I recently did with staff at school was a way in – despite the best advice to hold off because I only had one iPad to pass around, to hold off because iPad education wasn’t a realistic option at my school, because people weren’t ready, because because…

Play is an essential part of being a teacher – it’s the learning part of teaching. Play is experimenting, discovery, it’s creative, it’s action, it moves into a new space. Wouldn’t it be great if play was compulsory at school? Instead of instruction from teachers to students, play would put everyone on the same playing field. Risk would be a prerequisite.

If we wait until it’s safe to do something, we’ve been left behind. 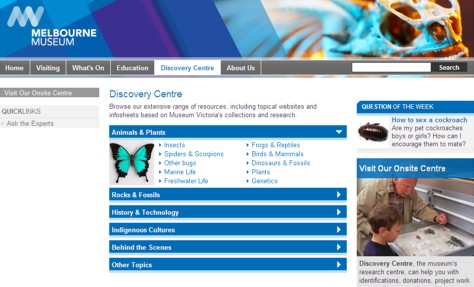 The Discovery Centre within Museum Victoria makes research interesting and hands-on. A young person can wander in and spend a few hours without realising that it’s been a learning experience. Let’s say you came in and browsed some of the 2,000 plus natural or cultural objects available – not just on display in cabinets and drawers, but also available to touch and examine – then you’d be able to delve into a little research in a number of ways; you could:

have a close look at these objects under magnifiers or video microscopes;
use the reference library of books, journals, education kits, DVDs or videos;
browse through the extensive collection of online resources on public computers;
and you could always ask a staff member for help.

When I visited the Discovery Centre as a student of teacher librarianship, the staff were eager to help, but not eager to supply a quick and easy answer – they encouraged students to find information and answers for themselves, pointing out resources available and suggesting ways of searching. The research process becomes a challenging discovery task, well supported by the excellent variety of materials and resources. It’s great to find research modelled in such an enjoyable way.

The Discovery Centre’s website is user-friendly, and offers an ‘Ask the experts’ section. If you have something you want identified, or you need help with a research project, you can email the museum’s information experts, either with a general request, or an identification request. Every week, there is a ‘question of the week’ published on the website.

I think this is a valuable resource for primary and middle years students. It’s great to take research out of the classroom, and into such a dynamic and resource-rich environment.